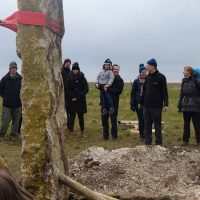 By Laurence Davies on 29th March 2018 in Articles

When I saw that English Heritage were going to experiment with raising a stone at Stonehenge it was something I was very keen to witness if not participate in. Perhaps unexpectedly the event in March 2018 was billed not so much as a study of the processes required for erecting the stone but to demonstrate how an apparently mundane action could attract people from far and wide.

Archaeologists now believe that the purpose of travelling to the area in 2500 BC to take part in ceremonies and erect the stones may well have been as important to our Neolithic ancestors as the finished monument itself.

In an article in the Guardian on 9th March 2018, ‘Party like it’s 2500BC’, Susan Greaney of English Heritage is quoted as saying ‘drawing a large number of people from far and wide to take part in the process of building was potentially a powerful tool in demonstrating the strength of the community to outsiders. Being able to welcome and reward these people who had traveled far, perhaps as a kind of pilgrimage, with ceremonial feasts, could be a further expression of the power and position of the community.’

Julian Richards the well known archaeologist with a career long interest in Stonehenge was overseeing the project along with Susan Greaney and other English Heritage staff.

The stone to be moved was a four tonne quarried block of Purbeck marble. This isn’t one of the types of stone used at Stonehenge (local sarsen and Welsh bluestone varieties) but is the same size and weight as one of the lintels and over twice the weight of the average bluestone.

The Welsh bluestones are the much smaller stones standing here in front of two of the massive sarsen uprights.

About sixty of us, including at least twenty children, took hold of the ropes and heaved the stone along wooden rollers with surprising ease. Raising it into an upright position wasn’t quite as simple as you will see in the little video but an A-frame and a little bit of effort saw it gradually come to the vertical.

Disappointingly for me and my lad no feast was provided for us but the esprit de corps was terrific. People were taking part from all over the world. My son and I were surrounded by different accents, European, South African and American, and we were all easily persuaded to literally pull together as a community.

It has to be said, and may come as no surprise, that my five year old was not much help on the pulling front, being happy to let himself dangle from the taught rope rather than dig his heels in to the Wiltshire dirt, but he did cause some laughter.

We don’t know for certain how our ancestors physically approached the enormous task of creating the monument we know as Stonehenge and we certainly don’t know how they approached it emotionally, what they thought about the project as a whole or of being involved in the monumental effort.

I would suggest the stereotypical image is one of groups of men sombre, determined and perhaps coerced, brows knitted at the seriousness of the job confronting them. I certainly don’t think I have ever considered that laughter may have been a part of the process. What an interesting and successful experiment.

You can read the Guardian’s article here:
https://www.theguardian.com/uk-news/2018/mar/09/stonehenge-party-building-secrets-unearthed

Here is a set of very short videos which follow our efforts:

1. Getting the rollers in the right plac

2. Getting the pullers in the right place

3. Pulling the stone to the hole, the easy bit

5. Tipping the stone into the hole