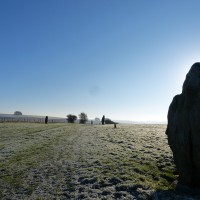 By Laurence Davies on 11th February 2016 in Articles 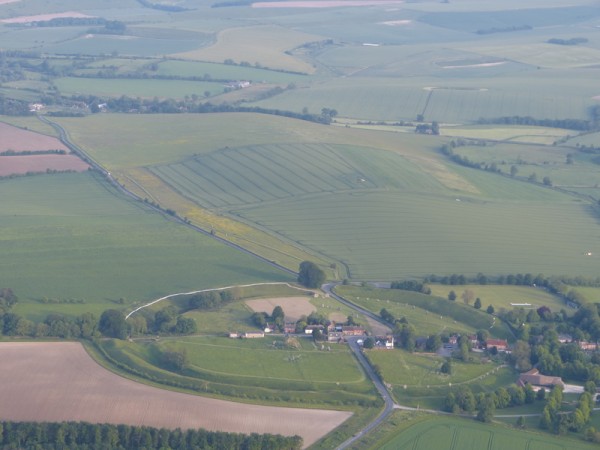 On a massive scale: Avebury and the Avebury Avenues

Probably the most extraordinary thing about Avebury is the sheer size of the monument. Not only does it incorporate the largest of all Britain’s stone rings but the ‘ditch and bank around the stone circle may be the largest surviving earthwork of this age anywhere in the world’ (Pitts 2000). But it is not just the actual monument known as Avebury that is gigantic. That monument sits within a landscape of archaeological sites, including the Avebury Avenues, that is truly enormous in scale.

Avebury henge, the ditch and bank with it’s stone circles, has four gaps or entrances in its circumference at the cardinal points. Leading out of at least two of these were avenues of pairs of massive sarsen stones that marched off into the landscape and by the early Bronze Age had connected a collection of spectacular sites. In the aerial photograph above one of these avenues, The West Kennet Avenue, heads from the gap in the bank at the top of the circle from this angle and follows the line of the road running along the yellowy-green strip that leads to the tree line towards the top of the picture. Before reaching the trees it probably veered off along the fence line before leaving picture left to continue its course to another monument known as The Sanctuary. In his book Exlporing Avebury  – The Esssential Guide Steve Marshall suggests that the avenue led to West Kennet Spring  and that, in effect, a new avenue then led away from here to The Sanctuary. He makes a very convincing argument for water playing a crucial role in the Avebury complex. 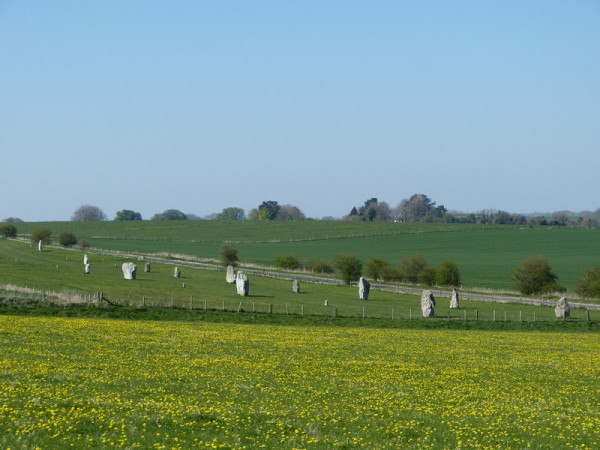 The West Kennet Avenue is one of the best known features in the Avebury landscape. It runs some 2.4km from Avebury’s southern entrance in a winding south easterly direction and terminates at The Sanctuary on Overton Hill. Best interpreted as some form of processional or ceremonial route The West Kennet Avenue once comprised about 100 pairs of standing stones or megaliths. The avenue was about 15m wide with stones set every 20 to 30m and standing between 1.5m and 3m tall, the heaviest weighing over 20 tons. Like everything else in the Avebury landscape it is of ambitious proportions. Built at the end of the Neolithic period, probably between c.2600 and 2300BC, the stones were erected by people using little more than antler picks, hide ropes, brute strength and community cooperation. It is, like so much else in this landscape, a remarkable concept and achievement.

When Alexander Keiller bought Avebury in 1934 he decided he wanted to put it back into its ‘original state’. This meant clearing the great banks and ditches of trees and rubbish, demolishing unwanted or derelict buildings within the Avebury henge and most spectacularly re-erecting fallen megaliths transforming ‘a relatively little-known archaeological site…(into) a public park’ (Pitts 2000). He first concentrated his efforts on the West Kennet Avenue where only four stones remained standing and in 1934 and 1935 erected 27 along the first third of its length and more again in 1939. This means we now have an impressive 37 pairs of megaliths to wander along giving us an excellent feel for its ancient form. 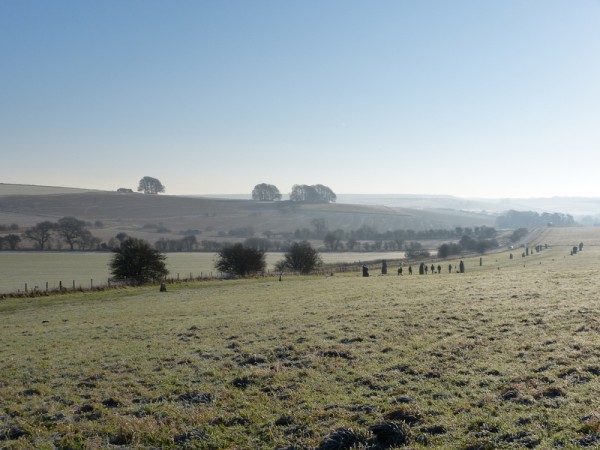 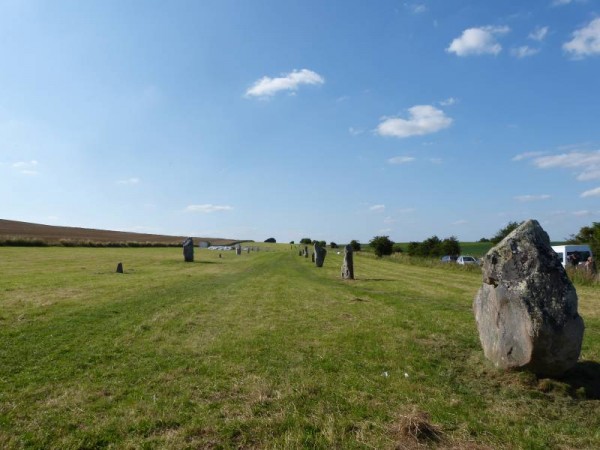 Looking north along the the West Kennet Avenue 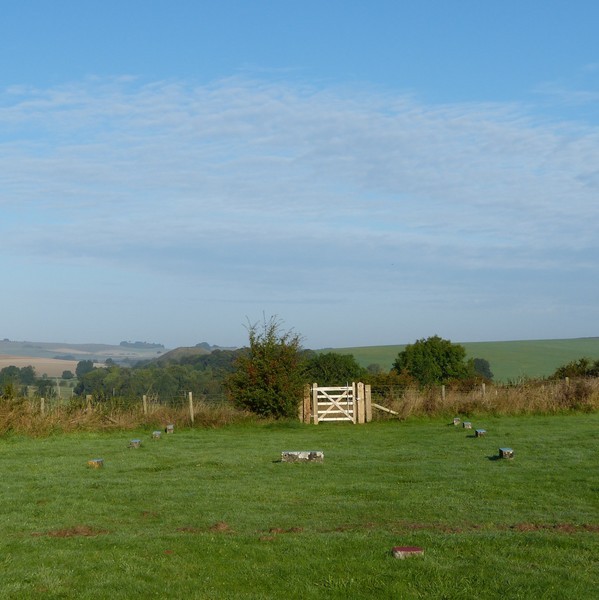 Photo above: The West Kennet Avenue terminates (or, more likely, begins) here at The Sanctuary. All the stones here were removed in the early eighteenth century but their original positions have been located through excavation. Concrete posts now mark where they once stood and you can see four pairs of these running towards the gate.

Photo left: people interspersed with the stones give an idea of the scale of the avenue. Some think the stones represented ancestors lining the ceremonial pathway. 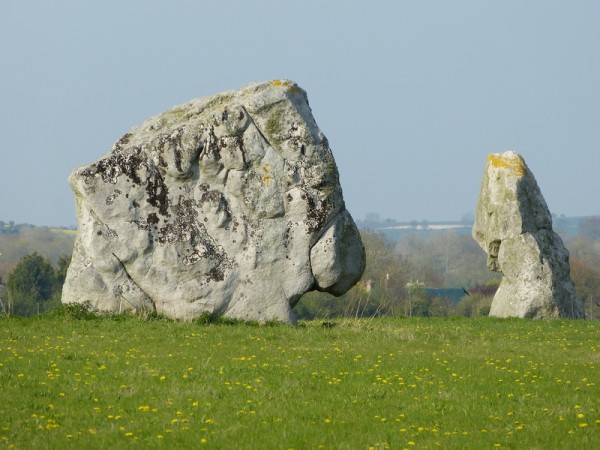 The Avebury Avenues – The Beckhampton Avenue

The Beckhampton Avenue however has a very different recent history. Very similar in form it runs, or rather ran, about 1.7km south-west from Avebury’s western entrance. In the aeriel photograph, heading out to the right of picture through the trees and buildings. No work was done here by Keiller or anyone else and as a result out of about two hundred stones only two remain standing. These stand a few metres apart at the furthest end of the avenue from Avebury and are named locally as Adam and Eve or the Longstones.

It is now known that Adam (weighing c.62 tons!) was once part of a cove of four massive stones, a structure similar to the three stone cove in the northern inner circle at Avebury. Eve, however, is the last survivor of the Beckhampton Avenue. Surprisingly these facts have only been recently ascertained.

A certain William Stukeley claimed the existence of the Beckhampton Avenue when he was documenting the area around Avebury in the early 18th century; one of his drawings includes the sinuous line of its route. However since that time all the stones apart from Eve were either removed, buried or broken up on site for building materials and the avenue’s memory soon faded. In fact Stukeley was ridiculed for his suggestion by archaeologists of the late 19th and 20th centuries who didn’t believe such an avenue had ever existed. (Pollard and Reynolds 2002)

It was only in 1999 and 2000 that some targeted excavations by Mark Gillings and Josh Pollard confirmed the avenue’s existence and the roles Adam and Eve played. Gillings and Pollard also demonstrated the existence of an oval enclosure c.140 by 110m first spotted in an aerial photograph in 1997 by Ros Cleal, National Trust archaeologist and curator of the Alexander Keiller Museum in Avebury. This enclosure, dating from 2650-2500B, has a form reminiscent of the much earlier one on nearby Windmill Hill, its broad circuit marked by a shallow flat-bottomed ditch about 2m wide and 1m deep. (Pollard and Reynolds 2002).

As the possible starting point of the Beckhampton Avenue it is interesting that this Longstones enclosure had, like The Sanctuary at the end of the West Kennet Avenue, been a site of feasting. The fact that its ditches had been filled in by the time the stones were erected doesn’t detract from that situation in my mind: it is a widely held belief that the erection of the stones along the avenues at Avebury probably monumentalised already well-established processional, ceremonial routes.

One twist is that Stukeley claimed that the Beckhampton Avenue went beyond this point to an area called Fox Covert on the nearby gallops. Could he be right? Perhaps the avenue stops and restarts which is why it hasn’t been re-discovered. After all as I mentioned earlier in Exploring Avebury: The Essential Guide Steve Marshall believes that the West  Kennet Avenue similarly has a gap in it about half way along its length. 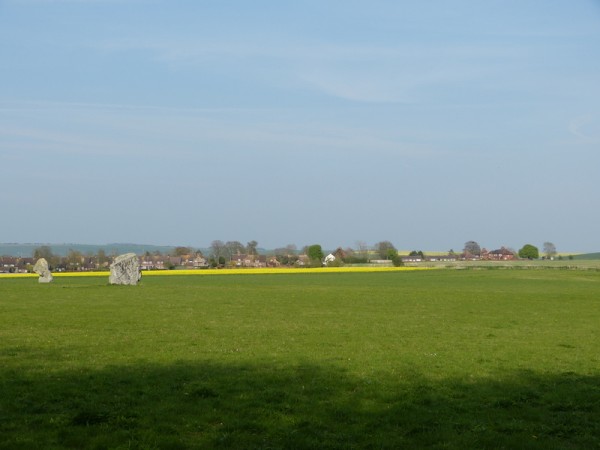 There is not much to be seen here now except for Adam and Eve looking rather sheepish in a field but with the knowledge gleaned from the recent excavations it is now possible to conceptualise the scale and extent of the monuments that once stood proud in this landscape and to theorise about their purpose.

The Avebury Avenues – Rites of Passage

One theory I propose is that ceremonies in the Avebury landscape might have included rites of passage: coming of age or inter-tribal betrothal ceremonies. As far as we know there are only two avenues leading out of the henge and there is no simpler way to divide human society than into the sexes. Within Avebury henge there are two inner circles each with an extraordinary central feature, the huge obelisk in the southern circle and the monumental three-stone cove in the northern.

It has been suggested that the large number of arrowheads found at The Sanctuary ‘perhaps acted as symbols of male identity, being employed in strategies of display and formalised combat’ and that such timber circles could be ‘places where the categorisation of people, things and relations was reaffirmed’. In this reading The Sanctuary would have acted as the departure point for the male initiates. Here evidence has been produced for feasting on cattle and pig, meat-rich elements ‘implying that partially butchered carcasses or joints of meat were brought onto the site for consumption’ (Pollard and Reynolds 2002).

Progressing down the West Kennet Avenue they would have ended up at the southern circle with its phallic obelisk while the female initiates arrived from the Beckhampton Avenue at the northern circle where it has been suggested The Cove might have associations with the womb. Some also believe that the stones that survive in the West Kennet Avenue are paired as masculine and feminine stones: each pair as you progress along the avenue consists of a pillar on one side (male) and a diamond shaped stone on the other (female) although for me ‘the jury is out’ on this point as not enough conform to the rule for me.

This coming of age theory would also fit well with the regular renewal of the timber posts at The Sanctuary as recently suggested by Mike Pitts’ excavations – it might have been an annual event. See Pitts’ book Hengeworld for an excellent account of his work in the area.

Of course this is all conjecture and might be well wide of the mark but it is fun to try and bring the huge Avebury complex to life and after all similar ceremonies take place in most societies around the world and are likely to have always done so. The single burial at The Sanctuary is one of an adolescent (sex undetermined) while other burials (all male) have been found at the foot of stones along the northern third of the West Kennet Avenue (Pollard and Reynolds 2002). A further burial was also found at the base of ‘Adam’ in the Beckhampton Cove.

Why not come and try your hand at interpreting the landscape. We can walk the West Kennet Avenue, interpret the rings at the Sanctuary and visit Adam and Eve as well as Avebury henge itself and its museum full of artefacts. There is even a cafe and a pub on site.

Please have a look at my Facebook posts from 15 May 2017 and 7 February 2018 for a flavour of a typical day out in the area: www.facebook.com/oldburytours 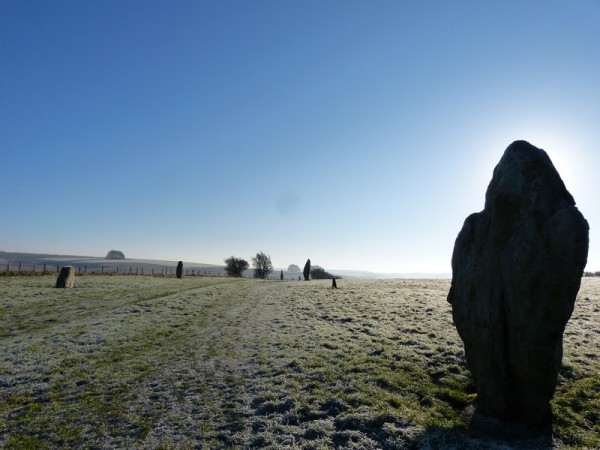 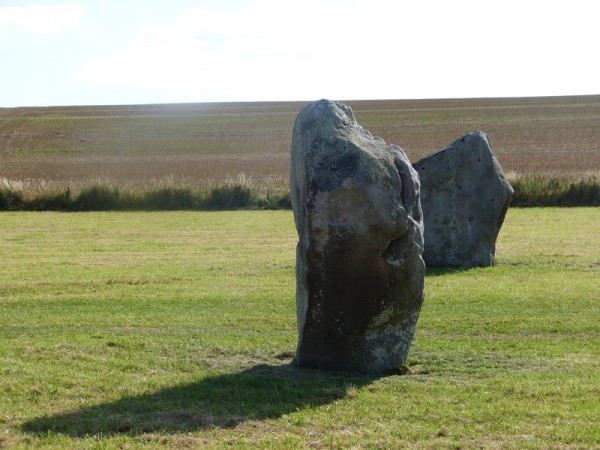 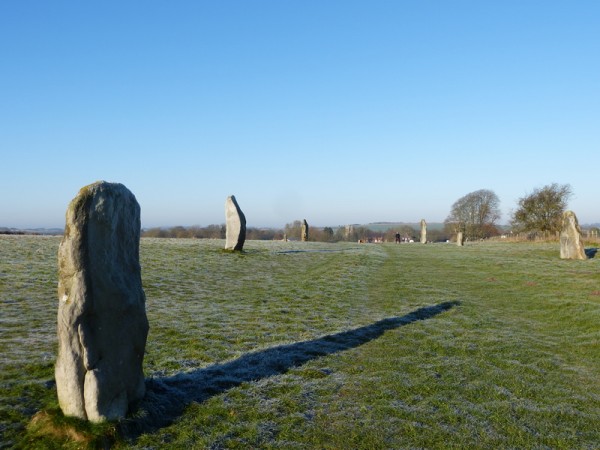 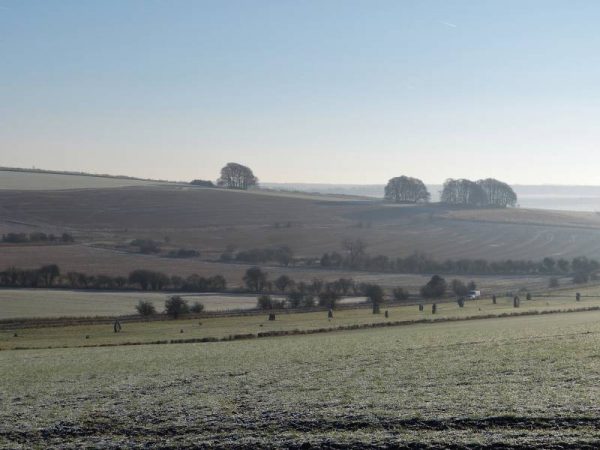 Looking down on the avenue

Please enquire about a tour to include the Avebury avenues via the ‘Enquire’ button below or for more information click on ‘Home’ for our home page,  ‘About’ for our story or ‘Tours’ for suggested itineraries. Read more about Avebury here.