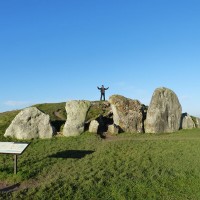 By Laurence Davies on 3rd March 2015 in Articles

Welcome to Oldbury Tours’ website. If you have landed on this page you may want to have a look at our home page first by following this link. You can also see suggested itineraries by clicking here and descriptions of recent tours by clicking here. Click on read more to learn about what we offer and about Laurence, our Stonehenge and Avebury guide.

Oldbury Tours provide full and half day tours of the Avebury and Stonehenge UNESCO World Heritage Site. Tours can include a visit to West Kennet Long Barrow. To enquire about a bespoke tour with our local, expert guide please click on the ‘Enquire’ button or follow the link here. 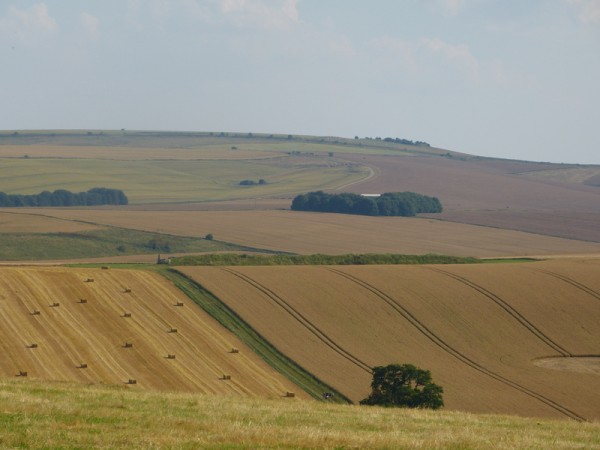 An extraordinary place to visit

West Kennet Long Barrow is seen here in the middle distance looking rather like an enormous olive green caterpillar lying across the top of the late summer fields. It is an earlier Neolithic* funeral mound of a type called a long barrow and is one of the oldest monuments known in the UK. It is one of the largest of this type of monument in the UK reaching over 100m in length hence ‘long’ barrow. It is also one of the  best preserved of the long barrows incorporating megaliths* in their structure and when excavated included the most extensive mortuary deposits so far encountered in the region (Pollard and Reynolds, 2002).

Altogether it is an extraordinary place to visit and as a result I rarely drive past it at any time of year without seeing small groups walking up or down the short path from the A4 for a visit. Contact Oldbury Tours and we will include a visit on your schedule.

Scroll down for much, more about West Kennet Long Barrow

By way of explanation

*Neolithic means ‘new stone’ to differentiate it from the Mesolithic ‘middle stone’ and Paleolithic ‘old stone’ ages, the Neolithic age being the most recent. This is when people first settled down and started farming in stead of following the hunter-gatherer life style of the previous stone ages. Some of the earliest monuments from this time, including West Kennet Long Barrow lie within our area.

Similarly megalith literally means ‘massive stone’. Megalithic refers to the type of monument building that incorporated such megaliths during the Neolithic period across Europe such as the huge stone structures of Carnac in northern France and the many tombs and stone circles in Britain and Ireland. The terms Paleolithic, Mesolithic and Neolithic were coined by Sir John Lubbock in the nineteenth century. He also bought Silbury Hill and later took the title Lord Avebury. His descendant, the 4th Baron Avebury, still owns the hill. 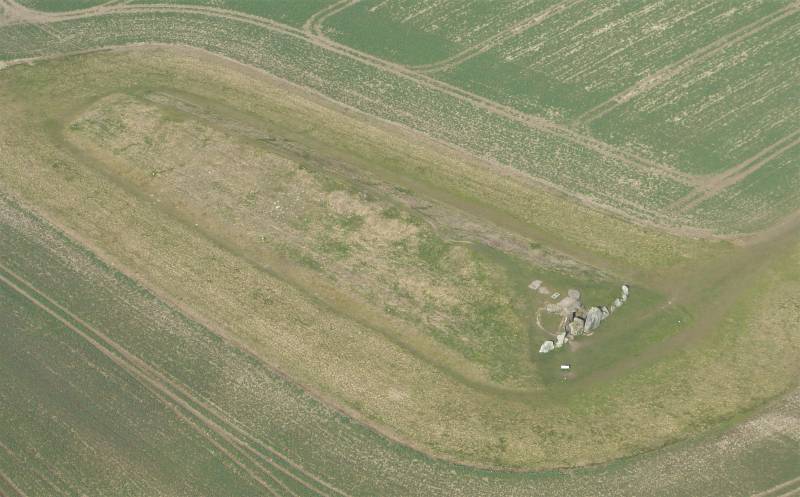 At the eastern end of the barrow there is a stone façade and behind this an impressive and elaborate stone construction consisting of 5 separate burial chambers branching off a central passage that extends 12m underground.

West Kennet Long Barrow was originally explored in 1859 by John Thurnam. During his excavations he only managed to locate the main passage and end chamber. It was only during further televised excavations by Richard Atkinson and Stuart Piggott in the 1950s that the 4 lateral chambers were discovered.

The stonework utilises the same local sarsen stone that was later incorporated into the stone monuments of Avebury and Stonehenge. It is supplemented by dry stone-walling made of oolitic limestone coming from slightly further away. The nearest source of this ‘foreign’ stone is Oldbury Tours home town of Calne, 10 km west (Leary and Field, 2010) although it may have come from as far away as northern Somerset. The horizontal layers of this stone are clearly visible in the internal photographs.

It was rather fortunate that Thurnam hadn’t found the side chambers because when Atkinson and Piggott did find them they used modern  excavation methods. Subsequent carbon dating of human bones found during these excavations suggest a date for construction between 3,700 and 3,600 BC assuming the chambers were built specifically to house these individuals. This research, carried out by Cardiff University and English Heritage, suggests a surprisingly brief period of funerary use with all the initial burials occurring within a few decades, perhaps only one generation. There were however a few subsequent interments mainly of children from 3,300BC up until perhaps as late as 2,500 BC (Cleal 2008). 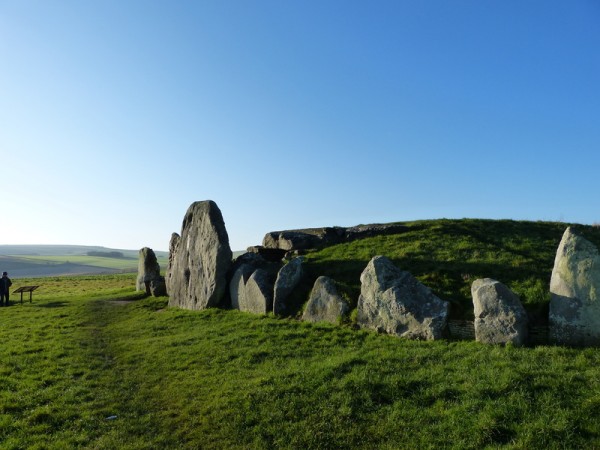 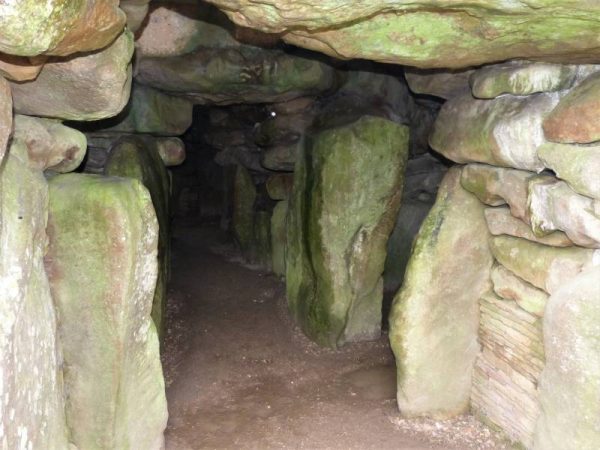 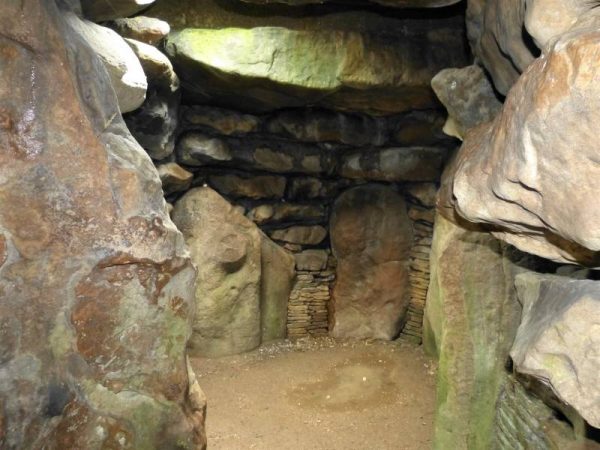 Looking into the western chanber

How many people were buried here?

The original excavator, John Thurnam, was the Medical Superintendent of the local asylum in Devizes and as such had an interest in the evolution of human crania. He also excavated the long barrow at the eastern end of the Stonehenge Cursus and another Neolithic long barrow, nearby Adam’s Grave. In the large western chamber Thurnam discovered 6 crouched inhumations, the remains of 5 adults and 1 child. Their ‘crouched’, or curled up, positions may mean that they were interred in organic – leather perhaps?- sacks. These would have rotted away over the 5,500 intervening years but bone pins which might have been used to secure the sacks were still present.

The 1950s excavations by Atkinson and Piggott revealed the remains of a further thirty or so individuals. The reason we cannot be absolutely sure of the number of individuals buried is because the skeletons were not all complete and the bones were often jumbled up. Archaeological practice is therefore to note the largest number of a specific bone, such as a left talus, that is found and state that there must have been ‘at least’ that number of people.

Who was buried within?

The burials had often been segregated by sex and age. In the western chamber, for instance, the majority of burials were of adult males while in the south eastern and north eastern chambers nearest the entrance the remains were mostly of children and the old aged.

Furthermore bones had often been sorted and re-organised. The south western and north western chambers contained bones of certain types such as skulls and the long bones of legs and arms. These were stacked against the walls, the bones thereby losing there lifetime identity. 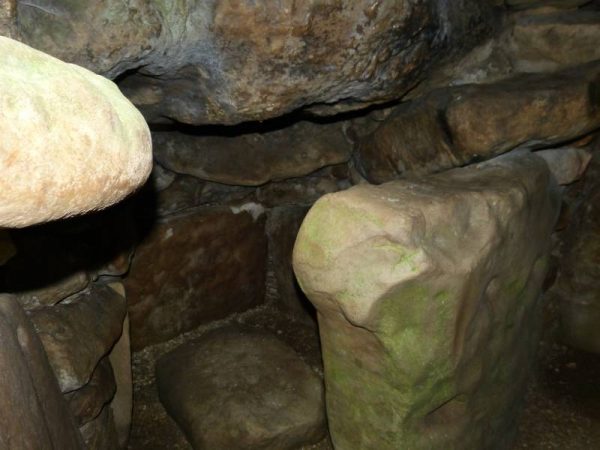 Looking into the South West chamber 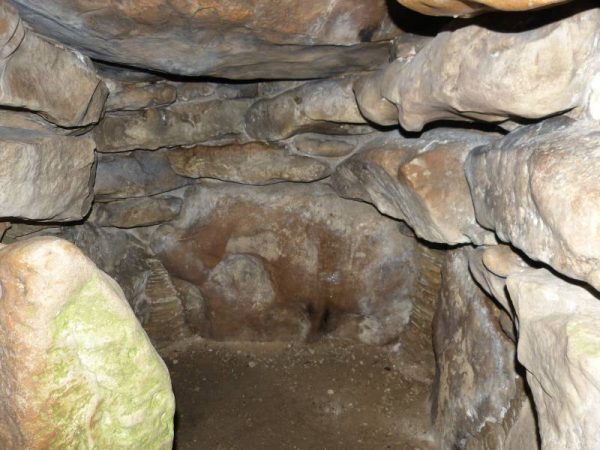 Looking into the North West Chamber

It doesn’t all add up

Also is also interesting is that skulls and long bones were ‘noticeably under represented’ (Pollard and Reynolds, 2002) compared to other bones. This perhaps gives us an interesting insight into early Neolithic burial practice. Were representative bones taken elsewhere such as nearby Windmill Hill for ceremonies or re-burial? Were some bones removed by nomadic family groups moving on to fresh lands and taking ancestral relics with them? Or the other way round: were family groups moving to the West Kennet/Avebury area and bringing ancestral relics with them to be interred here?

What rituals were performed and whether these rituals remained the same over the barrow’s enormous period of use is another unanswerable question. As Steve Marshall points out in his book Exploring Avebury the bones were often at the back of the chambers, perhaps leaving room for the living to visit. And what we do know is that the barrow was used as a ceremonial centre for over 1,000 years before there was a drastic and dramatic change. 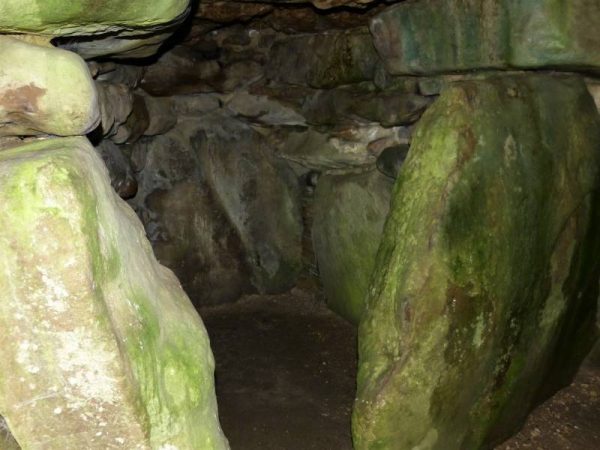 Looking into the South East Chamber 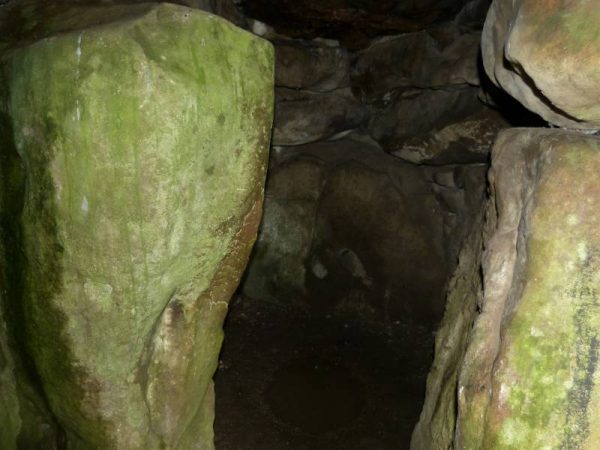 Looking into the North East Chamber

At about the same time that nearby Silbury Hill (the top of which is just visible on the far right of this photo) was being built, c.2,400 – 2,300BC or maybe slightly after, the tomb was sealed. Having been filled with debris West Kennet Long Barrow was finally ‘decommissioned’ by the erection of enormous sarsen blocking stones across the entrance. For centuries the rising sun, particularly on an equinox, had lit the interior shining straight down the central passage. As with many long barrows in the area the entrance is at the eastern end. These new stones emphatically stopped this effect – there was to be no more light for these ancestors.

Did this represent a symbolic parting with old traditions allowing a new culture to dominate? It was around this time that the Beaker culture arrived in Britain, the so called ‘Beaker People’ bringing with them or adopting the knowledge of how to make metal and establishing new traditions, practices and perhaps an altogether different interpretation of the world around them. I say ‘adopting the knowledge’ because most archaeologists now believe that the local people adopted a culture that was already established in continental Europe instead of there being any sort of invasion from abroad. However, the idea of people arriving with this new metal technology (and perhaps guarding their secret) would certainly give credence to them having an exaggerated influence over the indigenous population instigating these enormous changes in ritual practice. It is easy to see why this is such a stubborn popular conception.  A nearly complete example of one of their distinctive Beakers was found as part of the final infilling of the chambers and forecourt demonstrating that they and their beliefs were definitely around…. 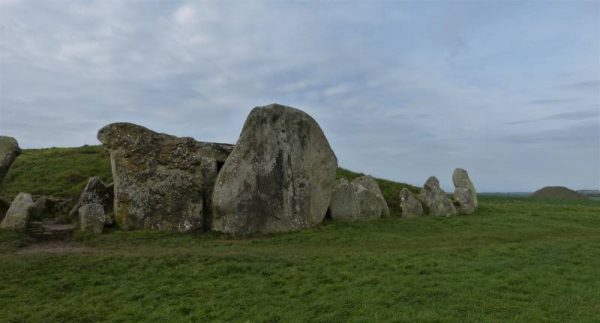 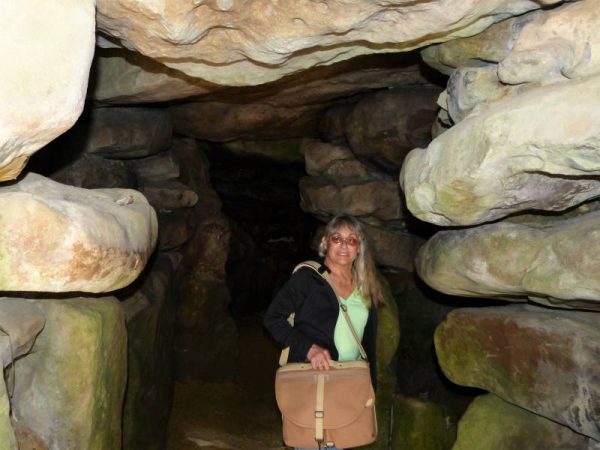 Click on the link button below to read more about long barrows in general.

Please enquire about a tour to include West Kennet Long Barrow via the ‘Enquire’ button below or for more information click on ‘Home’ for our home page,  ‘About’ for our story or ‘Tours’ for suggested itineraries. Read more about the Avebury area here.