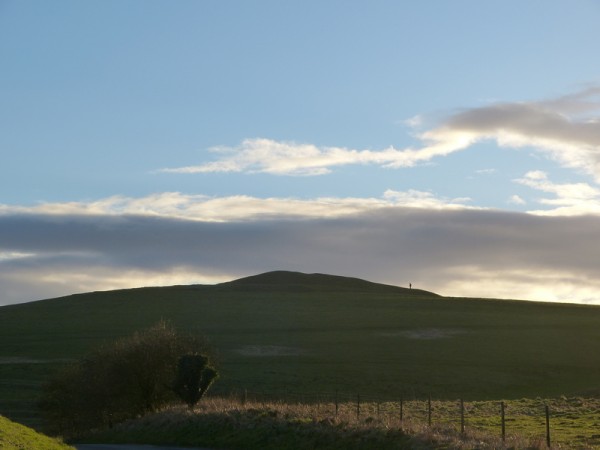 Adam’s Grave crowns Walker’s Hill on the northern escarpment of the Pewsey Vale. The tiny figure on the right hand slope of the monument gives an ideal of the scale of this Neolithic Chambered Long Barrow. 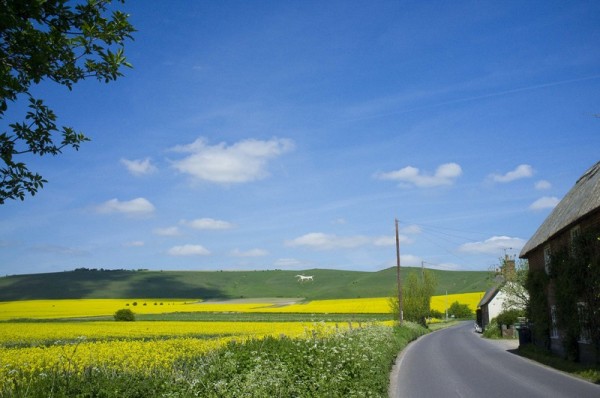 One of Wiltshire’s famous white horses (Alton Barnes, cut in 1812) can be seen on the slope below Adam’s Grave beyond the yellow fields of oilseed rape in this photograph taken by Olivia Taylor, clearly showing how the chalk stands out even from this distance.

The photograph below is of Oldbury Tours’ local white horse on Cherhill hill. Again it is not that old having been cut in 1780 although it is the second oldest in Wiltshire after Westbury (1778). Interestingly it was designed by a Dr. Christopher Alsop of Calne who was a friend of the artist George Stubbs, famous for his equestrian paintings. The horse is carved into the hillside  below our eponymous hill-top iron age fort, Oldbury Castle, the massive ramparts of which are visible on the ridge above. 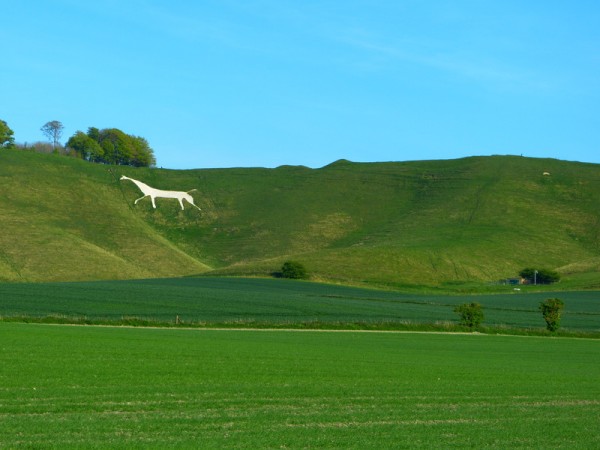 Adam’s Grave is a Neolithic chambered long barrow dating from the first half of the 4th Millennium BC and so at least 5,500 years old. Situated on top of the chalk escarpment overlooking the Pewsey Vale, Adam’s Grave commands stunning views south across to Salisbury Plain. However since it is a burial chamber it was perhaps the view of IT that was more important. Visible from all the surrounding area it would have served as a permanent reminder of the ancestral past and perhaps a territorial marker for anyone approaching from the south. As with so many of the other chalkland monuments of this time, the long barrow was capped in chalk and would have gleamed white much as the local carved white horses do today. As Martin Green says in his terrific book ‘A Landscape Revealed’: ‘Their original appearance must have been exceptionally striking. Cresting the hill their gleaming white form would have provided a clear statement to those who viewed them of the resident community’s rights to the land.’ (Green, 2000 p.54)
Adam’s Grave lies a few hundred metres west along the ridge from the contemporary causewayed enclosure at Knap Hill so they probably had a close connection at the time. It was excavated by John Thurnam who also also excavated West Kennet Long Barrow and Amesbury G42 at the end of the Cursus in the Stonehenge landscape. Thurnam was Medical Superintendent of the Devizes Asylum in the 1860s and he recovered some human remains for study as part of his research into the skull shapes of our ancestors. However the long barrow has not been subjected to modern excavation methods and no doubt has much more to disclose. 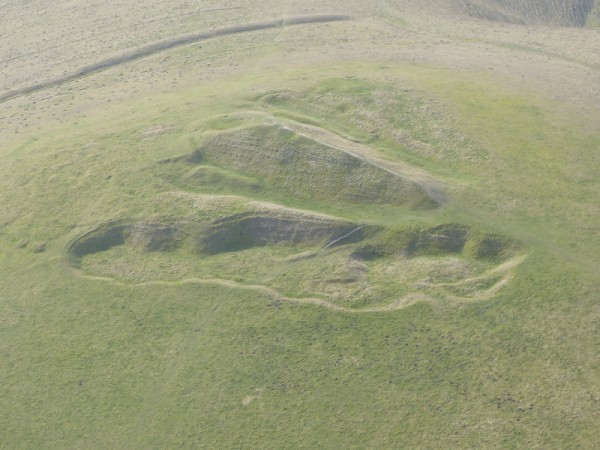 As you can see in this aerial photograph (taken by me from a 2 seater aircraft piloted by Tony Hughes of the Wiltshire Microlight Centre) the material required to build the mound including the chalk to finally cover it was quarried from two massive ditches running either side of it. This is consistent with the  design of all the long barrows in Wiltshire but in most cases, as for instance at West Kennet, the ditches have long since silted up and, if anything at all has survived thousands of years of the plough, only the mound survives. The flip side of this however is that the ditch silt has often protected the archaeology beneath, as it is the bottom of the ditch that is contemporary with the mound construction, giving modern archaeologists plenty of material for research should they excavate.