The scene of fascinating recent discoveries

Durrington Walls is the site of some of the most fascinating recent archaeological work in the Avebury and Stonehenge World Heritage Site if not the whole of the UK. Between 2003 and 2009 the Stonehenge Riverside Project, directed by Mike Parker Pearson, gathered together a stellar line-up of British archaeologists to carry out some thorough 21st century archaeology within the Stonehenge landscape.

Where the Stonehenge builders lived?

Probably the most spectacular discovery was the exposure through excavation of the floors, hearths and post holes of late Neolithic houses within the area known as Durrington Walls. The houses date from the time the massive sarsen stone monument was erected at Stonehenge and the archaeologists are certain they were inhabited by the people that built and used our most famous landmark. The remarkably narrow range of carbon dates from Durrington Walls suggest that the site was only occupied for about 40 years between 2,500 and 2,460 BC and perhaps even then only at certain times of the year. Laboratory analysis of animal bones left over from massive feasts suggest people came from far and wide particularly to celebrate the winter solstice, the incoming folk perhaps swelling the village into a town of thousands for brief periods thereby also providing the manpower required for monumental building projects.

As well as domestic buildings, the foundations for other structures were discovered including the chalk-cut post holes for two circular timber structures that might have resembled in wood what Stonehenge looked like in stone. The southern of the two circles has a floor plan of 6 concentric rings of posts that is remarkably similar in size and form to Stonehenge, the 4th circle for instance having the same number of timber uprights as the 4th stone circle of Stonehenge; the famous sarsen circle with linking lintels. The innermost ‘ring’ was similarly a horseshoe except here it was open to the mid-winter sunset.

However, rather than being prototypes for the stone monument Parker Pearson is certain these wooden buildings served a purpose, probably ritual, for the inhabitants of Durrington Walls in the same way he says that Stonehenge served a purpose for the spirits of their ancestors: wood and transience for the living, stone and permanence for the dead; one ritual area for the living, another ceremonial area for those who have passed into the domain of the ancestors (see the column on the right starting ‘The photograph above…’ for a description of the suggested relationship between the two monuments).

As should be expected with any unprovable theory there are other eminent archaeologists who are unconvinced of this reading but the Stonehenge Riverside Project unarguably uncovered some extraordinary new evidence for where the people that built Stonehenge right at the end of the Neolithic age spent at least some of their time.

Although there is not a huge amount to see now the scale of the site is evident from the massive bank that was built to enclose or ‘henge in’ what had  apparently become a sacred site after the domestic buildings had been abandoned. The bank still stands 2 -3 metres high in places and with a diameter of 520 metres the roughly circular henge is 100 metres wider  than Avebury. Like Avebury, Durrington Walls’ bank had an enormous internal ditch following its circumference although here the ditch was not quite as deep (still some 6 metres however) and is now fully silted up so Avebury can trump it on that account. It is possible to wander over at least half of the area enclosed by the bank (about 11 hectares) as it is owned and managed by the National Trust.

Another circular monument, Woodhenge, lies very close by and walking from here one starts to appreciate the scale of the area that has Stonehenge at its centre. If you know where you are going you can carry on from here beside farmland and across meadows to approach Stonehenge along the last third of its processional avenue. By following in the footsteps of our ancestors we can perhaps start to understand how all the various monuments in this landscape relate to each other. While plenty of mystery still surrounds Stonehenge and its environs some of the jigsaw, whose pieces have been missing for so long, is gradually being put back together.

There was great excitement in 2015 when Birmingham University and The Ludwig Bolzmann Institute in Vienna announced that they had found a new line of some 90 sarsen stones buried beneath Durrington Walls’ south western bank. The two universities had been conducting a huge survey using various remote sensing and surveying techniques (including lidar and magnetometry) of the whole of the Stonehenge landscape including Durrington Walls – the Stonehenge Hidden Landscape Project. This new stone setting was heralded as their greatest discover amongst a fair few other important revelations. I, like almost everyone else, was taken in by it and couldn’t wait to hear more on the matter. Please see my excited Facebook article at the time posted on 13th September 2015: www.facebook.com/oldburytours.

Excavations in the first two weeks of August 2016, however, proved that the two ‘stones’ they targeted were in fact post holes, the empty sockets for enormous wooden posts. Remarkably these posts, which could have weighed as much as two tonnes, were later removed vertically without damaging the holes they had been standing in: the excavations revealed they had existed, had not been left to rot in place, and had shown no evidence for the usual rocking backwards and forwards of the post to enable its extraction. Curious!

What had the posts been there for? Well, they were seemingly in place at the same time as the Durrington Walls houses, i.e. before the henge bank was constructed, and they curve around the entire south western side of the area, the direction of Stonehenge. Were they there to form a barrier, a shield between the land of the living and the land of the dead? Perhaps. 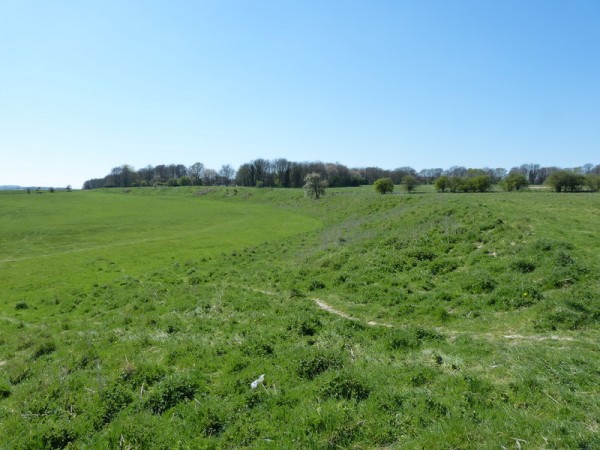 The huge sweep of the western bank of Durrington Walls, the most pronounced section remaining, can be seen curving towards us from the top left of this photograph. The Neolithic builders actually utilised the low natural escarpment for this portion of the henge bank so the land behind continues at the same height but in other places the bank was built from excavated material (turf, topsoil and then chalk). This work created an enormous ditch running inside the bank for the henge’s full circumference, no less than 6 metres deep and up to 18 metres wide!

The site would have been visually spectacular especially when first dug out of the chalk which, upcast to form the bank, would have left both ditch and bank gleaming white.

The photograph above was taken from the eastern verge of the ‘new’ embanked road that runs through Durrington Walls, so the viewer is looking east from still within the enclosed area of the henge monument. Excavation has shown that there was originally an avenue leading from this point to the river Avon whose course is highlighted by the white-blossomed trees in the valley below. The 15m wide Neolithic pathway of packed natural flint linked the massive henge enclosure with the river and probably served both a functional and a ceremonial purpose for the people who lived here four and a half thousand years ago.

Parker Pearson’s theory, eloquently delivered in his book Stonehenge, is that people made their way down this road to the river perhaps especially on the occasion of the Winter Solstice. Each year on this day the sun rose along the axis of the Southern timber circle (see main article, left) now buried deep below this point on the roadside. Perhaps this was the rallying point on this auspicious shortest day of the year.

After processing down the avenue the participants’ journey continued along the river Avon to its junction with the Stonehenge Avenue. This processional avenue in turn leads from the river 2.8 km over land to Stonehenge itself. The final straight section of the Avenue on its approach to Stonehenge is aligned directly on the horseshoe of trilithons that straddles the main axis of the stone settings.

Assuming the ceremony was scheduled to last the full day the people approaching would then have seen the same mid-winter sun setting directly in front of them behind the great monument in the  knowledge that, the appropriate offerings having been made, the days will lengthen from the next sunrise, the cycle will begin again and mother earth will once more provide for the coming year. A very neat idea.