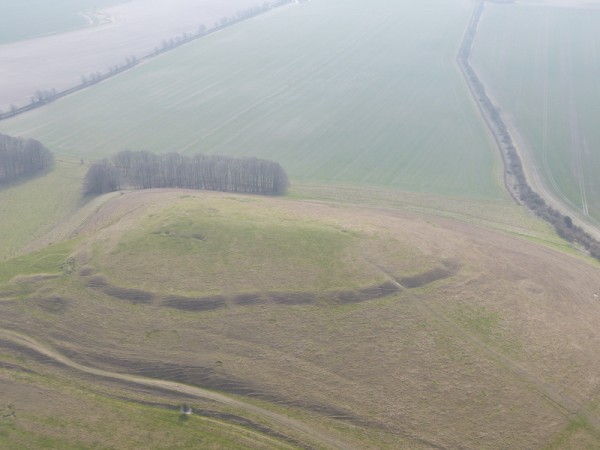 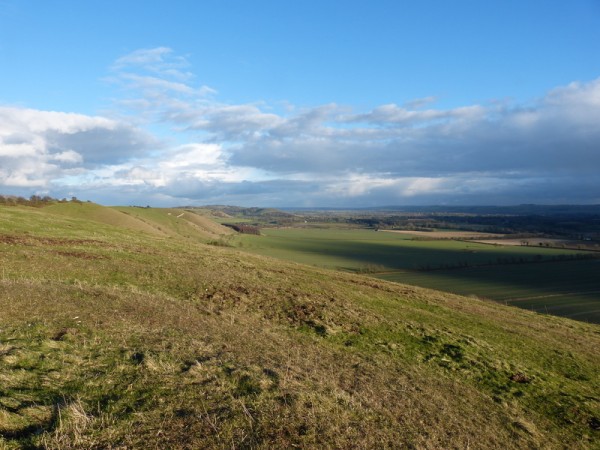 Knap Hill, Wiltshire is the site of an earlier Neolithic* Causewayed Enclosure constructed in the mid-fourth millennium BC one of only fourteen such monuments in England that survive ‘to any extent as earthworks’ (Oswald et al, 2001). These enclosures were probably built as venues for social gatherings rather than as permanent domestic settings although most of those excavated seem to be variations on a theme both in construction and use. As Andrew Lawson says they were perhaps ‘meeting places, markets, political, ceremonial or religious centres all in one’ (Lawson 2007). However, excavations have suggested that they generally were occupied for at least some of the year, probably most usually between spring and autumn. As is often the case with these ‘camps’ the Knap Hill site occupies a strategic position on top of a hill and in this case on the edge of a dramatic escarpment. From here it offers commanding views across the Pewsey Vale to the south with Salisbury Plain the site of the, then future, Stonehenge in the distance. It is one of my very favourite places and I love the affect the area around it has on anyone experiencing it for the first time especially when approaching from the north. 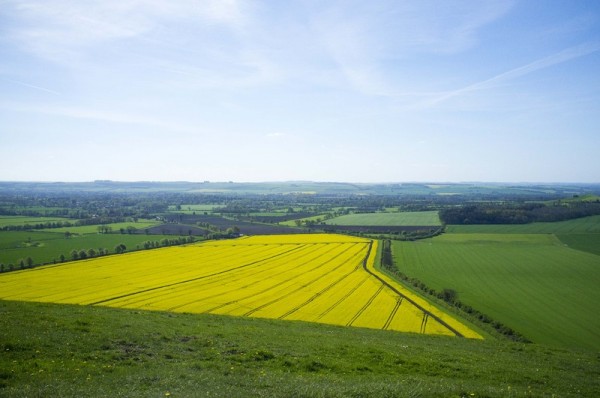 Andrew Lawson among others points out that causewayed enclosures are often paired with long barrows, a type of earlier Neolithic mound concerned with funerary rituals, and this is certainly the case here with ‘Adam’s Grave’ located a few hundred metres west along the ridge. Quoting evidence from a similar site on Hambledon Hill in Dorset, Lawson suggests that bodies were exposed in these places having been systematically defleshed. The disarticulated bones were subsequently dispersed ‘some to be buried in selected locations at the enclosures, others to be placed temporarily or permanently in long barrows’ (Lawson 2007). As Ros Cleal points in the current National Trust guide to Avebury ‘almost more than anything else, it is this treatment of the dead that brings home to us the difference between our own time and this distant past’ (Cleal 2008). 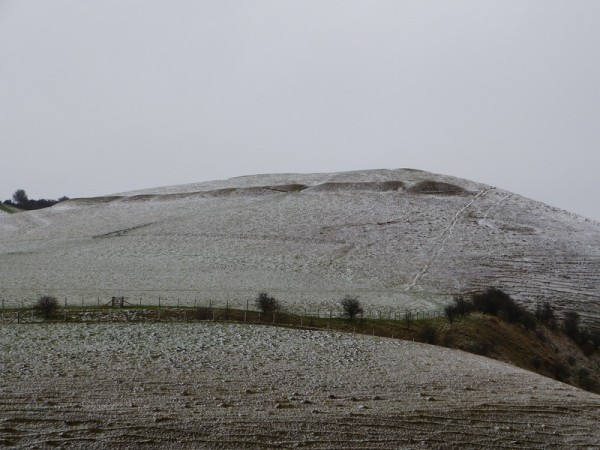 The Knap Hill site was one of the first of these enclosures to be investigated. It was excavated during 1908 and 1909 by Maud and Ben Cunnington on behalf of the Wiltshire Archaeological and Natural History Society. In the ditch they discovered huge quantities of Neolithic pottery and worked flint. Animal bone was also present and it had often been deliberately deposited in the ditch, not just discarded as rubbish – it would be therefore fair to assume that there was a ritual element to this action that perhaps followed periods of feasting or sacrifice. The ditch is up to 3 metres deep in places and lies outside a simply constructed bank as can be seen in the aerial photograph, the causeways that give the enclosures their name still very evident left undug to give access across the ditch into the interior.
* Neolithic means ‘new stone’ to differentiate it from the Mesolithic ‘middle stone’ and Paleolithic ‘old stone’ ages, the Neolithic age being the most recent, covering the period from c.4000BC to 2,400BC in the UK, when people first settled down and started farming in stead of following the hunter-gatherer life style of the previous stone ages. Similarly Megalithic literally means ‘massive stone’ and refers to the type of monument building that incorporated such megaliths during the Neolithic period across Europe such as the huge stone structures of Carnac in northern France and the many tombs and stone circles in Britain and Ireland.

Click on the ‘read more’ button below to read more about causewayed enclosures in general.