By Laurence Davies on 8th May 2015 in Articles

Welcome to Oldbury Tours’ website. If you have landed on this page you may want to have a look at our home page first by following this link. You can also see suggested itineraries by clicking here and descriptions of recent tours by clicking here. Click on read more to learn about what we offer and about Laurence, our Stonehenge and Avebury guide.

Oldbury Tours provide full and half day tours of the Avebury and Stonehenge UNESCO World Heritage Site. Tours can include a visit to Woodhenge. To enquire about a bespoke tour with our local, expert guide please click on the ‘Enquire’ button or follow the link here. 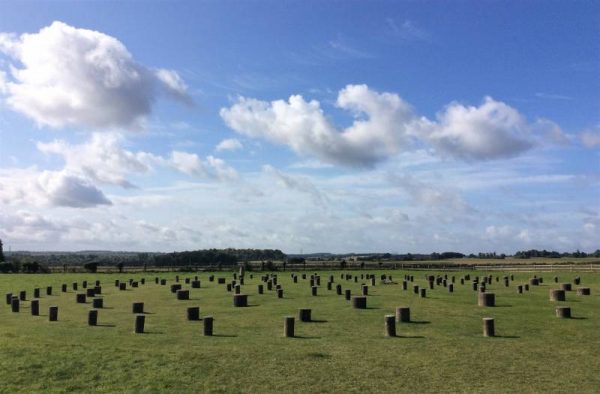 Woodhenge on a sunny afternoon

Laurence standing in among the concrete markers to give scale

The sweep of the outermost ring. When the sockets were all holding massive timber posts it most have been quite an extraordinary place

The birth of aerial photography in archaeology

Woodhenge was discovered in 1925 by WW1 veteran fighter pilot Group Captain Gilbert Insall VC MC. He was one of the first people to recognise the benefits to archaeology of aerial photography. Flying out of Netheravon aerodrome, one of many airfields that were by then installed on Salisbury Plain, Insall noticed marks on the ground that were evidently not natural.

In the fields below him Insall could make out a pattern of dark circles in the crops. They were caused by the actions of people digging through the shallow soil into the chalk bedrock below. Plants, whether grass or planted crops grow more vigorously above dug features due to the increased depth of moisture retaining, nutrient rich soil. From the air it can be very easy to spot areas that have been disturbed even if they are barely visible on the ground. In fact it is extraordinary how often these marks have lasted until modern times and just how clearly they still stand out.

What Insall photographed was the monument we  now know as Woodhenge. Less than two miles from Stonehenge it caused a great stir in the archaeological circles of the time. Could it be another hidden Stonhenge? It was certainly about the right size. It was down to Maud and Captain Cunnington of the Wiltshire Archaeology and Natural History Society (WANHS) to dig out the truth.

Between 1926 and 1928 the Cunningtons revealed what Mike Pitts calls ‘one of the greatest timber structures of Hengeworld’ (Pitts, 2001). They discovered that the monument comprises a classic henge format of a broad ditch with a narrow external bank broken by a single entrance to the North East. Inside this henge are six concentric oval rings of post holes carved into the chalk. Four and a half thousand years earlier the holes had contained the footings for huge timber posts. These posts might have supported a roof. More likely, however, they were open to the sky and quite possibly linked around the top by horizontal lintels as at nearby Stonehenge.

There is a child’s grave near the centre which is probably later than the main monument’s construction, possibly even Roman (Darvill 2006). The site was probably built and used during the second half of the third millennium BC and so is contemporary with the main sarsen and bluestone building phase of Stonehenge and the inhabitation of the adjacent Durrington Walls henge. Other similarities to Stonehenge are notable. Not only do the two structures share the same proportions but they also share the same axis: Woodhenge is similarly aligned on the midsummer sunrise and midwinter sunset.

Unfortunately, as at ‘The Sanctuary’ near Avebury, the Cunningtons did a very thorough job excavating all the post holes. This may seem like the obvious thing to do but even with today’s brilliant scientific techniques modern practice is to target only small areas for excavation. This way you leave the majority of any site for future generations of archaeologists to examine, with presumably even more sophisticated tools. Further excavations were however conducted through the surrounding bank and ditch in 1970 by Geoffrey Wainwright and John Evans when they found a second burial.

Having dug the site the Cunningtons erected concrete markers that not only show the positions of the original timber posts but also their approximate diameters as not all six rings contained the same sized timbers. Although this probably wouldn’t be done today it is useful for our purposes as it gives us a good idea of the scale of the structure and as you walk around the markers the design gradually becomes apparent after originally looking like a jumbled mess. Laurence is standing in the centre of the monument in one of the photos to give an idea of scale.

What’s it all about?

In short, we don’t know. However, excavations produced an enormous quantity of animal bones, mainly pig, pottery and worked flint. From this we can safely say ceremonies were held at Woodhenge that had an element of feasting. It would appear that at certain times of year rituals were performed at this wooden ‘temple’ for the people that were living in the landscape around. From analysis of material excavated from similar wooden structures at nearby Durrington Walls it appears that these people travelled from far and wide to be present.

One theory, that is now widely held, proposes that Stonehenge is actually a stone version of these timber temples. After all it was constructed using woodworking techniques. The idea is that the timber versions provided ritual centres for the living and that Stonehenge provided the same for the ancestors. What they were used to in life could be carried on beyond death. Read more about Stonehenge here and Durrington Walls here.

I took the aerial photographs on this page with a pretty standard camera. The first is of what archaeologists believe to be a Bronze Age or Iron Age enclosure that could date from any time between 2,400BC to 43AD. ‘The Horton Enclosure’ as it is known has never been excavated although I did take part in a magnetometer survey of the area with the field group of the Wiltshire Archaeology and Natural History Society (WANHS) in October 2013. The two lane road on the right of the picture gives some scale to the monument.

The second is of the Wilsford Henge. This is another Bronze Age enclosure that was previously only known from aerial photographs. I was involved with excavations here in 2015 and once the trench had been opened I thought it would make a great aerial photograph giving scale to the hidden monument. 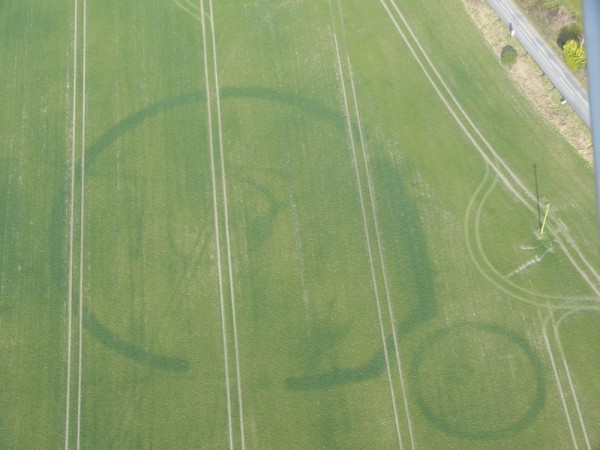 Members of the Wiltshire Archaeology and Natural History Society Field Group, including Laurence second left, with Andy Payne (English Heritage) at the Horton Enclosure in October 2013 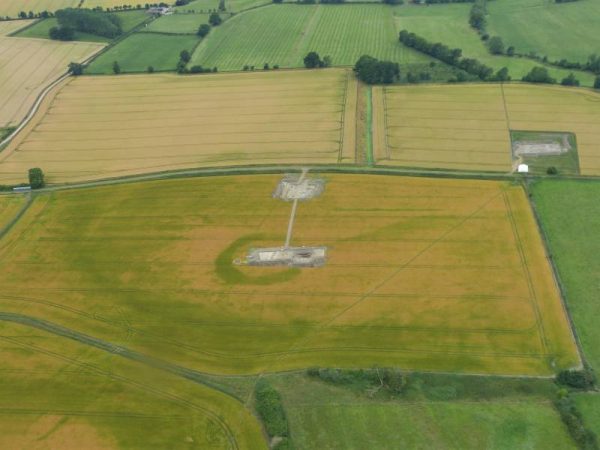 The 40 metre diameter feature known as Wilsford Henge stands out clearly in the barley crop as a dark green ring. Photo taken by Laurence during excavations in 2015 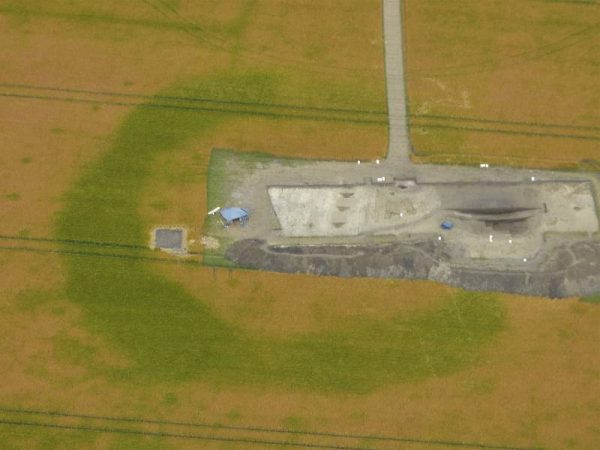 From directly overhead iit is easy to make out the dark green ring of the ditch. You can also see a ring of pits dug in a circle outside of this ring. Despite constant agricultural use of the soil above this site has survived for four and a half thousand years.